The Cville Dems have organized a great event – Superstar legal journalist and podcaster Dahlia Lithwick, one of Charlottesville’s very favorite ex-residents, returns “home” to do a special public event, free and open to all, where she’ll talk about her new book Lady Justice: Women, the Law, and the Battle to Save America, followed by Q&A.

You’ve seen her on MSNBC and CNN, listened to her Amicus podcast, read her columns in Slate and New York Times… now come see her in person!

Lady Justice profiles the women lawyers who worked tirelessly to hold the line against the most chaotic and maligned presidency in living memory. There was Roberta Kaplan, the famed commercial litigator, who sued the neo-Nazis for their 2017 “Unite the Right” violence here. And Sally Yates, the acting attorney general of the United States, who refused to sign off on the Muslim travel ban. And Becca Heller, the founder of a refugee assistance program, who brought the fight over the travel ban to the airports. And, of course, Stacey Abrams, whose efforts to protect the voting rights of millions of Georgians may well have been what won the Senate for the Democrats in 2020. The Cville Dems will have copies of the book available for sale at the event; please buy a copy from them to support Dahlia and our work. It will make a great holiday gift for anyone, but especially for that idealistic daughter, granddaughter, or niece of yours! 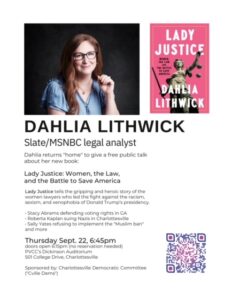